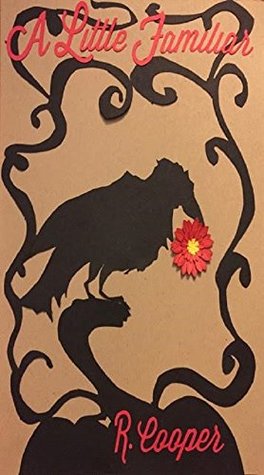 A powerful witch, Piotr Russell has resigned himself to loneliness, because ordinary humans can’t know what he is, and other witches are intimidated by his abilities. Generations of Russells have lived and died with only their familiars at their side. The presence of a friendly familiar is enough to keep even the loneliest witch sane, and yet Piotr deliberately hasn’t chosen one.

The rarest of rare jewels, Bartleby is a human familiar: a witch with no magic of his own, and a desire to find a strong witch to help and serve. In particular, he desires to help and serve Piotr, and everything in Piotr wants to let him. Bartleby was meant to be his familiar; Piotr knows it as surely as he knows when it will rain or when the apples in his garden will ripen. But what Piotr wants from Bartleby, all he’s ever wanted, is for Bartleby to love him, something he thinks is impossible.

Russells live and die unloved, and he won’t allow Bartleby to feel obligated to spend his life with him as his familiar if he could be happy in love with someone else. But Samhain is a time for change, when walls come down and borders grow thin, and Bartleby isn’t going to waste what might be his last chance to convince Piotr that they were meant to be. He might have no magic, but love is a power all its own.

“All that, and they’d have to want me too. That seems like a lot to ask of anyone, Bartleby. That’s a job as well as a husband. Why take that on, for a great big boring grouchy bear?”

I wanted my first review of the year to be of a queer story that I really enjoyed, and preferably one that is self-published and/or lesser known. So, here we are.

A Little Familiar is a truly magical read, and I’m not only saying that because it’s about two queer witches. This was one of those books where I absolutely adored the writing style, and I felt like the descriptions really brought the story to life. I could almost taste the cinnamon, apple and pumpkins. It also had a couple of metaphors that I’m STILL squeeing over, because they are so accurate and descriptive, and yet I never would have thought of them.

Bartleby is exactly my type of character, in style, personality, the fact that he’s compared to a trickster spirit, and the fact that he’s genderfluid. Or, is he? It’s a little confusing, because here’s this quote that states he isn’t:

He wasn’t genderfluid, at least, not how Piotr understood the term, but then again perhaps he was. Bartleby was… Bartleby. He wore what he chose to wear and acted how he chose to act. He’d never requested to be addressed by another pronoun or name, he simply was, like a trickster deity of old, although one not interested in deception.

But honestly, Bartleby is so obviously nonbinary in the entire book, that I have a suspicion Piotr (whose POV the above quote is from) just doesn’t get that genderfluid people can exist without necessarily using different names or pronouns. I mean, seriously:

“I’m, um,” Bartleby said, and didn’t immediately finish his thought. He had slipped a barrette into his hair and his lips were sparkling with gloss. The Dorchester Grocery shirt and red coat were familiar, but he had on a wool skirt and indigo tights. “I’m this me, today.”

In conclusion, I definitely read Bartleby as nonbinary, and the representation really worked for me personally as a nonbinary person.

Please read this book and fall in love with Bartleby with me. (Piotr was also great, but let’s be honest, Bartleby stole the entire show for me.)