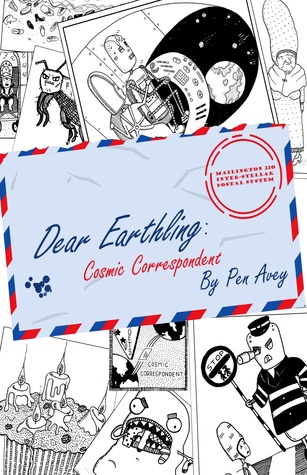 Dethbert Jones is your average ten-year-old – only he lives on the planet Crank with his pet chicken-snail and his robot best friend Andi Social. When he and Andi join the Space Cadets, a Scouts-like organization, they are totally smooshed at the prospect of going to Space Camp where they’ll learn to pilot a real shuttlecraft and disintegrate weapons of mass destruction. Blamtastic!

To earn his cosmic correspondent badge, Dethbert begins writing to an earthling – and boy, does he have a lot to write about! Between questions about Earth food, culture, and activities, Dethbert recounts his experiences attempting to avoid his horrible little sister, impress his animal-obsessed crush, and fly a space shuttle. Misadventures – from hairy ankles to crash landings – abound, but Dethbert’s curiosity and enthusiasm can’t be crushed, not by anything in this galaxy, anyway!

Dear Earthling was an adorable middle-grade sci-fi story with fun illustrations. It’s about a kid who is a Space Cadet, which is basically a Boy’s Scout in space. The chapters are all fairly short, as they are letters the main character writes to his human penpal.

The planet where Dethbert lives, Crank, is sort of like Earth in a parallel universe. Most of their things have names that are horrible puns on Earth names, like “bored games”, “Duesday”, “When?sday” and so forth. I admit that the puns got a little too much for me eventually and I groaned at many of them, but I’m sure kids would appreciate them more.

Dethbert is a good who gets into trouble and fights with his friends sometimes, but he also has a big heart, and many eccentric friends and family members. Overall, I found this a really endearing sci-fi story that is perfect for preteens.

One thing that made me pause was the mention of one kid’s parent being a missionary who was nearly eaten by “cannibalistic savages” that he tried to convert. That story has pretty negative connotations, and I feel like it was really unnecessary to include it, since it’s not even a big plot point or anything.

One thought on “Letters and Space Adventures: Dear Earthling”