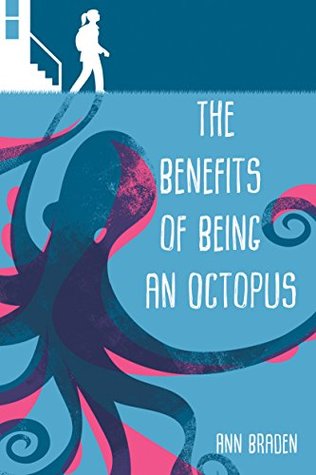 Title: The Benefits of Being an Octopus
Author(s): Ann Braden
Series: –
Genre: Contemporary Fiction, Middle Grade
Published: September 4th 2018 by Sky Pony Press
LGBTQAI+: gay side character
I received an ARC from the publisher through NetGalley in exchange from an honest review.

Seventh-grader Zoey has her hands full as she takes care of her much younger siblings after school every day while her mom works her shift at the pizza parlor. Not that her mom seems to appreciate it. At least there’s Lenny, her mom’s boyfriend—they all get to live in his nice, clean trailer.

At school, Zoey tries to stay under the radar. Her only friend Fuchsia has her own issues, and since they’re in an entirely different world than the rich kids, it’s best if no one notices them.

Zoey thinks how much easier everything would be if she were an octopus: eight arms to do eight things at once. Incredible camouflage ability and steady, unblinking vision. Powerful protective defenses.

Unfortunately, she’s not totally invisible, and one of her teachers forces her to join the debate club. Even though Zoey resists participating, debate ultimately leads her to see things in a new way: her mom’s relationship with Lenny, Fuchsia’s situation, and her own place in this town of people who think they’re better than her. Can Zoey find the courage to speak up, even if it means risking the most stable home she’s ever had?

This moving debut novel explores the cultural divides around class and the gun debate through the eyes of one girl, living on the edges of society, trying to find her way forward.

This is a scary, brave, complicated, important book. It’s a book about getting out of abusive relationships, about the gun control debate, about things not being black-and-white, about bullying, about speaking up, about a girl with the weight of the world on her soldiers, and yes, about octopuses, too.

That’s one of the things about people on that beautiful tropical island: they can’t see who’s floating about in the ocean around them. Or maybe they can and they just choose not to look. I don’t know.

The Benefits of Being an Octopus is about a 13-year-old girl Zoey who lives with her mother and her three small siblings in her mother’s boyfriend’s trailer. There is a lot of focus on surviving and supporting your family while poor, including the power being cut off, applying for benefits, not being able to wash your clothes, and the other kids at school laughing at you. It’s about the bitter feeling when it seems like the other kids are allowed to have Valentine’s Day gifts as their biggest problem, but you aren’t.

This book was really difficult to read at times, with many parent figures and adults who have failed these children. Some of them were trying their best and ended up doing better, while others were toxic and people you needed to get away from.

I remember thinking several times that these kids (both Zoey and some of her classmates) sound older than they are, that their debate club sounds like something we’d have at college, but then I realised that I have the wrong view on 13-year-olds and they are more mature than I’d think. I’m glad that they are, but it’s sad to feel like they have to be. There were so many things in this book that in an ideal world kids Zoey’s age shouldn’t have to deal with.

Overall, this was a difficult that very important book that deals with many different issues that some real kids have to deal with every day.

Also, shout out to teachers who notice when something is wrong and go out of their way to help.

3 thoughts on “The Benefit of Being an Octopus: A Clever and Brave Middle Grade Novel”