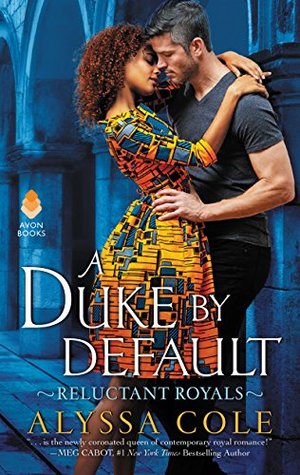 Title: A Duke by Default
Author(s): Alyssa Cole
Series: Reluctant Royals #2
Genre: Contemporary Romance
Published: July 31st 2018 by Avon
LGBTQAI+: none
Other representation: Black American heroine, Scottish/Chilean hero with a Jamaican stepfather, multiple side characters of color
I received an ARC from the publisher through Edelweiss in exchange from an honest review.

New York City socialite and perpetual hot mess Portia Hobbs is tired of disappointing her family, friends, and—most importantly—herself. An apprenticeship with a struggling swordmaker in Scotland is a chance to use her expertise and discover what she’s capable of. Turns out she excels at aggravating her gruff silver fox boss…when she’s not having inappropriate fantasies about his sexy Scottish burr.

Tavish McKenzie doesn’t need a rich, spoiled American telling him how to run his armory…even if she is infuriatingly good at it. Tav tries to rebuff his apprentice—and his attraction to her—but when Portia accidentally discovers that he’s the secret son of a duke, rough-around-the-edges Tav becomes her newest makeover project.

Forging metal into weapons and armor is one thing, but when desire burns out of control and the media spotlight gets too hot to bear, can a commoner turned duke and his posh apprentice find lasting love?

I heard great things about A Princess in Theory, a romance novel with a Black heroine in foster care studying science, with a Black prince love interest. While non-YA romance with M/F pairings is a relatively new genre to me, I was excited to get my hands on an ARC of the sequel, A Duke by Default. In the end, this novel ended up being everything I hoped it would be.

In A Duke by Default, the POV alternates between Portia, an American woman who takes an internship in Scotland, and Tavish, a swordmaker who is really into Scottish history and is supposed to teach Portia how to make swords as well. From the very beginning, their dynamic was everything I loved: there is some age difference, but an even bigger difference in lifestyle. Portia is young, an expert at search engines and social media, and immediately eager to redesign the website of Tavish’s armory. Tavish hates being recorded, doesn’t answer the phone most days, and just wants to be left in peace to make his swords and take care of his community. Portia tries her best to act easy-going and confident, but in reality, she has extreme self-esteem issues due to her undiagnosed ADHD and dismissal from her parents. Tavish is a grump and kind of an asshole, but he holds free classes and hands out meals to the kids and teens in the community.

Since Portia and Tavish are so different, their relationship starts out rough. There is really only one thing they agree on: neither of them needs a workplace (or any kind of) relationship to complicate their lives even further, not even if sparks fly between them from the first moment. I loved how they both tried to convince each other they didn’t need or want this, even as their banter grew more playful and their attraction undeniable. While I usually scroll through sex scenes, with these two and this writer I found even those worth reading. In short, their dynamic was truly everything I wanted.

Our protagonists both have whole, vivid lives outside of the romance. Portia has issues with her family and feels constantly compared to her twin sister, who seems better at everything. Tavish works at the armory with his brother and sister-in-law, and calls her Chilean mother’s Jamaican husband his father instead of the white Scottish man he never met. Gentrification, racism and contemporary backlash against immigration in Scotland are all important themes in the novel, both before and after Tavish finds out that his absent biological father happened to be a Royal Duke. There is also significant criticism towards the aristocracy and royalty, and some glorious geekiness as well.

I loved both Portia’s and Tavish’s relationships with their siblings, and I really, really loved the relatable and validating portrayal of finding out as an adult that maybe you have ADHD and all the things giving you insecurity have an explanation. I also fell in love with Johan, who is a side character in this book but will be the hero in the next one, so I can’t wait to get my hands on A Prince on Paper as soon as it comes out.

6 thoughts on “A Duke By Default: My Favourite Dynamic in a Romance Novel”