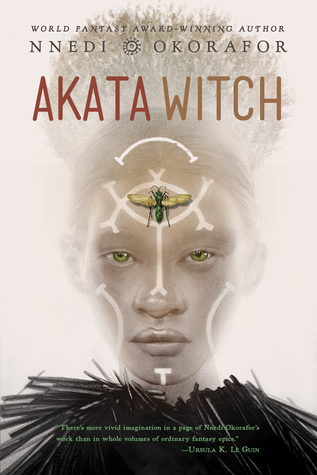 Sunny Nwazue lives in Nigeria, but she was born in New York City. Her features are West African, but she’s albino. She’s a terrific athlete, but can’t go out into the sun to play soccer. There seems to be no place where she fits in. And then she discovers something amazing—she is a “free agent” with latent magical power. And she has a lot of catching up to do.

Soon she’s part of a quartet of magic students, studying the visible and invisible, learning to change reality. But just as she’s finding her footing, Sunny and her friends are asked by the magical authorities to help track down a career criminal who knows magic, too. Will their training be enough to help them against a threat whose powers greatly outnumber theirs?

This was a wonderful, magical adventure in Nigeria with a protagonist that I loved, and a friend group that anyone would envy.

Sunny is an albino twelve-year-old whose parents are from Nigeria, but she was born in the United States, but now they live in Nigeria again. In this book, she finds out she’s one of the Leopard people (people with magical abilities) – what’s more, she is a free agent, which means that neither of her parents have similar abilities.

I loved how imaginative this book was: all the places, creatures and people encountered, and the culture of the Leopard people was great to read about it. The concept of money being earned by knowledge (yes, money literally falls from the sky when you learn something new) was something that I simply adored. I loved the description of the spirit faces, especially Sunny’s spirit face, and I can’t wait to see how it will become more significant in the second book.

Sunny was a loveable protagonist who stood up for herself against the racism and the sexism and the world, and those who mocked her for her albinism. I loved how she called out all the messed up stuff that was happening. There was only one line that disappointed me where Sunny claimed to be ashamed of being female after she saw some other girls crowd around a boy – it was unnecessarily judgmental and didn’t fit in well with Sunny’s other comments.

I also loved their friendship group, where Sunny makes friends with two other Nigerian kids, and an African American boy who was sent to Nigeria after he got in trouble at his old school. I loved how they worked together, how protective Sasha in particular was of Sunny at the soccer match, and I loved how the differences between Nigerian and African American people were addressed.

‘Akata Witch’ also addressed several events from the real world, from the Nigerian prince scam to witch children (which was a concept entirely new to me, so don’t tell me this book wasn’t educational).

The last thing I expected in this book was a plot about a ritualistic serial killer, but I still got it – and let me tell you, the final showdown between the kids and the antagonist was scary to read, and I feel like the sequel will only get more intense.

All in all, I loved this book, and also: what do you mean the paperback of Akata Warrior isn’t out until October?!