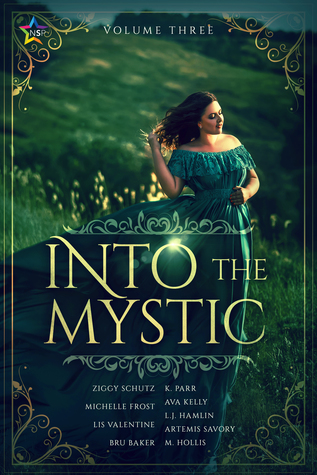 Her ghost had once told Clotho that no proper ghost story has a happy ending, because ghosts don’t end.

It’s no secret that I have a soft spot for fantasy, paranormal and fairytales, so of course I had to pick up an anthology that has nine F/F stories with paranormal elements. While the stories had the paranormal and the sapphic main characters in common, there was a great variety in paranormal creatures, writing style, and my feelings towards them as well.

Some of the stories were truly creative gems with unexpected and rarely seen ideas: the opening story, It Started Before Noon by Ava Kelly is in itself about ideas that are made into stories. The main character is a muse who grows story inspiration in a garden like flowers, but she just can’t get the romance buds right. I loved the little details, like how the different types of stories (comedy, angst, etc.) had different flowers and needed different kinds of care. Swoon by Artemis Savory had siren-like creatures acting like pirates whom I would have loved to learn more about. I loved the myth surrounding these sisters, but I still had so many questions – I would love to read a full length novel with them.

Other stories took more often used concepts or species, but still had the kind of magic that makes them an easy 5-star read. Home by K. Parr centers a wolf pack made up entirely of women, and a college student who is accepted into the pack (and the family) after getting close to the pack’s Alpha. I loved that this story had an older love interest, and I loved the description of the pack dynamics as well. The Hunt by M. Hollis is about a young vampire forever stuck as a teenager who has been adopted by a lesbian vampire couple. On her first hunt, she meets a human girl, and she finds herself wanting to meet her again. I felt like this story ended a little too soon, I would have loved to read more. And By Candlelight by Ziggy Schutz was one of my favourite stories in the anthology: I admit that I still don’t really understand the logic of it, and yet the two main characters and their relationship was so endearing that it absolutely stole my heart.

Vampires and werewolves seemed to be a popular choice for this anthology, and yet each story had some kind of unique spin on it. My Cup of O Pos by L. J. Hamlin has a disabled vampire with Ehlers-Danlos syndmore (ownvoices!) who goes out on a date with the cute human nurse from the ER who treats her with respect and compassion. This story also takes place in a world where vampires are common knowledge and there are laws about what they can and cannot do, and it uses this fictional/fantasy marginalisation to address real-life marginalisations and their intersections as well. Dance With Me by Michelle Frost is a romance between a werewolf and a vampire that left me with many burning questions about the backgrounds of the characters, wishing that there was a longer story to read.

Unfortunately, there were a couple of stories that caught me off guard and I didn’t end up enjoying them much. I am used to most non-YA lesfic I read having at least some kind of sexual content (My Cup Of O Pos has sex scenes as well, and yet I felt like I got to know the characters), but Heart’s Thaw by Bru Baker and Fire and Brine by Lis Valentine were both mostly erotica with very little plot or characterisation. While I liked the original idea in Heart’s Thaw and the twist in Fire and Brine, I felt like I barely got to know anything about the characters, other than the sex scene that takes up half of such a short story.

Overall, I really enjoyed this anthology and I found some true gems in it, but I do wish that the blurb or tags made the sexual content of books clearer. It was especially off-putting because most of the stories didn’t have any sex at all, so having two stories that were purely erotica just didn’t seem to fit in well with the others.

One thought on “Review: Into the Mystic, Volume 3”